Last weekend I went to see Sherpa Film and was blown away. It was everything I hoped for and more. Everest has a special place in my heart after I trekked there last year with World Vision Australia. It also brought up the conflicts that you feel when heading to this most hallowed place that brings with it political controversy and environmental concerns, the film addresses all of this with pinpoint accuracy.

The cinematography in this film was spectacular. An Australian production and world class cinema. The techniques to capture some of the epic shots of the mountain are unbelievable and it took me right back to the base of the largest mountain in the world.

Emotive and captivating. Sherpa Film draws you in from the opening shots and takes you along an emotional journey as you learn more about Chomolungma, the sherpas name for Everest, their mountain home. I learnt a lot about the Sherpa culture when I was there and the film highlights the complexities in the community – earning an income and wanting to protect a sacred site.

The film focuses around the recent tragedy where 16 sherpas lost their lives. It made me question taking on the trek altogether. It’s an internal struggle and a very publlic debate – should we be trekking thousands of people up this beautiful but unpredicatable mountain?

It will make you laugh, cry, fume with anger and think! That is a good film! A film that makes you think. I’m still thinking and talking about it a week later.

Here’s a review I read in the Sydney Morning Herald and I really liked it, very accurate! 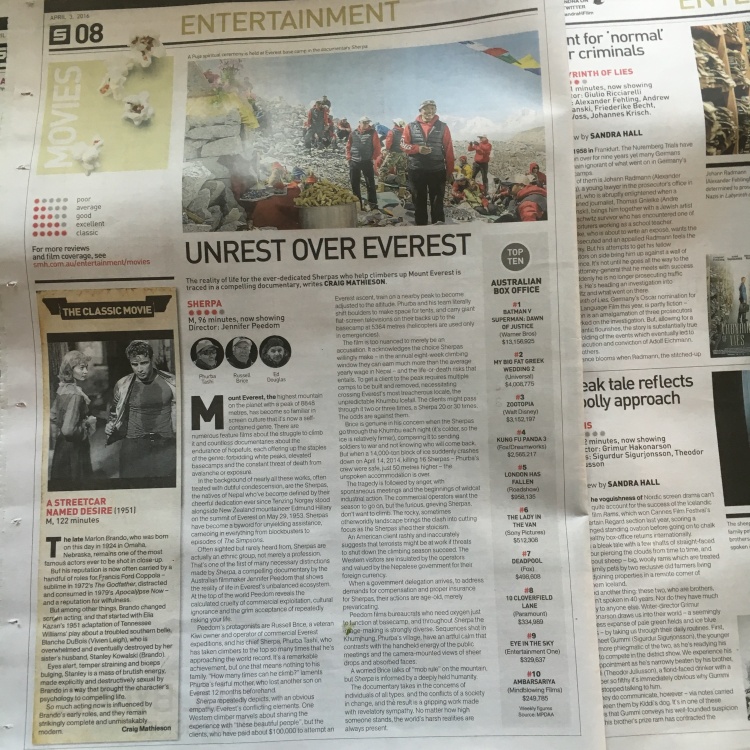 See the original post here with the Sherpa Film competition on Lovelly Communications.

Thanks to Transmission Films, I was given 5x Double Passes to offer my audience to see this film. So I decided to pose a question on the films theme of challenge, adversity and struggle.

“What is the greatest obstacle, mountain, you’ve ever had to overcome?”

It was just a question I thought I would throw out there, nothing too difficult, and see what came back. Basically the first answers to come in would win! EASY! But I was blown away by the openness and honesty it brought out in people. They opened up and poured their hearts out in the comments. They really dug deep and looked for a time that they’d really pushed themselves mentally, physically or both.

A friend once said to me “Emma, if you’re not literally or metaphorically climbing a mountain, you don’t feel like you’re achieving.” She really hit the nail on the head for me. I do things in extremes. But not everyone lives that way and for some people their challenges are far different to mine.

For some people, thinking of a tough time is hard to pin point. Another interesting result of the competition, having conversation with family and friends who couldn’t identify an obstacle. We all have our own paths and will have different journeys. It was really cool to just see people THINK about it and have some time to reflect.

Here are some of the amazing responses I got for this competition included:

“Hmm – probably getting divorced and leaving New Zealand after 15 years (the home of Sir Edmund Hillary, of course!), and moving to Sydney to start over from scratch. Either that, or being told I’d had a stroke at the age of 34, spending three months having copious tests done only to find I hadn’t – but no-one could tell me what I DID have. (Twelve years later, still a mystery.)”
– Robert

“The greatest obstacle I have had to overcome was losing my Father to a mental health illness. It really was a tragedy in itself, and similar to the story of the Sherpas our family had to endure much grief and anger before conquering the mountain that was my Father.
– Kim

“It was definitely the trail to Machu Picchu for me…
Although the biggest “Mountain” to overcome wasn’t actually the Andes themselves. Being away from my family and traveling on my own for the very first time was the biggest challenge.
Luckily I got to experience the trip with some very special people wink emoticon.”
– Sharon

“The deafening silence and unforgiving wet earth when I ran the Outback full marathon last year was pretty challenging. Especially as I started 30mins late and didn’t catch up to the main group of runners!”
– Tom

“It’s definitely got to be completing Oxfam trailwalker haha!! Past the 18km mark every tree root dodged and rock stepped over felt like a bleeding mountain! Never mind climbing over boulders in the rain and dark still the hardest thing I’ve done and such a bittersweet memory as so proud we kept going through the sleep deprivation hallucinations to finish!”

“Here is my answer Em! Mount Kosciuszko. I did a 2-hr hike at the beginning of the winter season 3 years ago. It was rainy and foggy when we arrived at the mountain. However we still decided to continue with the hike when the rain calms down a bit. At the end we reached one of the lookout point and see the blue sky. It was a great experience!”
– Grace

“Nursing a single engine aircraft with a partial engine failure over the rainforest jungle in Papua New Guinea with people on board and landing at a tiny bush airstrip. Probably the most stressful 40 mins of my life.. Camped overnight, Engineers flew in with a new cylinder, replaced it working under a tarp for sun/rain protection. Flew on the next day. Bush flying, eh? ”
– Tom

Thanks to everyone who entered, and do make sure you see this film!

My name is Emma. Owner and Director of Lovelly Communications, I specialise in Personal Branding and key messaging. I'm also the Australian representative for Take me to India, a luxury boutique travel company in India. I feel blessed to run businesses that give me the freedom to follow my true passion, travel! I'm happiest when I'm having new experiences. Whether it's a new cafe down the road, a bucket list item like Everest Base Camp or seeing friends in another city, I truly love travelling! So please join me in my many adventures across my many sites. And please do contact me for information on any of the above! View more posts

One thought on “Sherpa Film – Spectacular!”

Lovelly to hear from you Cancel reply